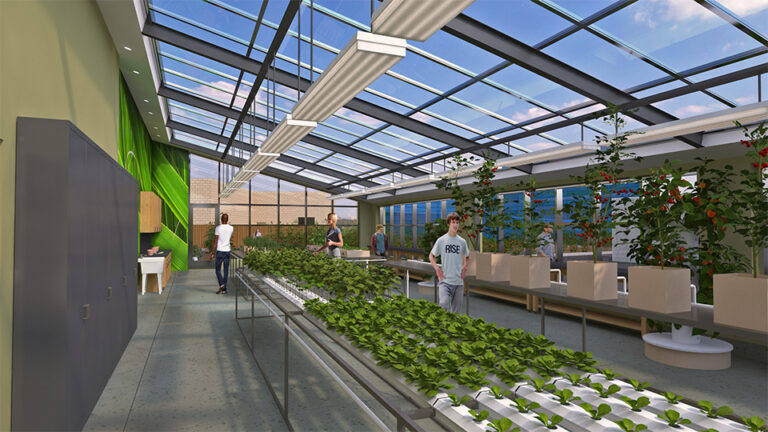 Current and future students at High Tech High School have a lot to look forward to.

High Tech, one of the Hudson County Schools of Technology, will move into its $160 million new home in Laurel Hill Park in September 2018. The 340,000-square-foot campus will offer amenities and technology not typically seen at your average high school

“I think this (high school) is going to be one of a kind for a while,” said Lloyd Rosenberg, president and CEO for DMR Architects, the architectural firm managing the project. “Certainly this is going to make Hudson County – from an educational high school level – really supersede anything that they’ve had in the past.”

The new building will house 1,500 students in grades 9 through 12—250 more students than High Tech’s current facility in North Bergen, which will become the new home for North Bergen High School’s 10th, 11th and 12th grades after the move.

Four separate wings will be built for each of the vocational branches and career academies that High Tech offers: vocational training, architecture and engineering, applied science, and performing arts.

Each wing will have specific technological designs and features to advance its learning environment. A hydroponics lab will be available in the applied science wing, while the architecture and engineering program will have labs elsewhere.

The theater wing, meanwhile, will have its share of advantages including studios for dance, drama, TV production studio, and digital video.

The building will also have shared spaces, including a main gymnasium with bleacher seating, a cafeteria, a 316-seat performing arts theater, a black box theater that will seat 100, a media technology center, as well as yoga, judo and CrossFit rooms.

While students and staff will reap the benefits of these new features, the whole community will benefit from its energy-efficient technologies.

“We’re really designing this to be the most energy-efficient building possible,” Rosenberg said.

These advancements include a wind turbine and solar panels to generate renewable energy. The building will also be equipped with rain harvesting technology to use for its water supply.

The county announced plans for the new school in 2014. The state approved to fund 59 percent of the school while the county pays for the remainder. The foundations of the building are set and the first level is completely floored, according to Rosenberg.

“This facility will embellish these great programs the school has and give (students) a whole new world,” Rosenberg said.

How architects can take advantage of economic cycles, even the downturns