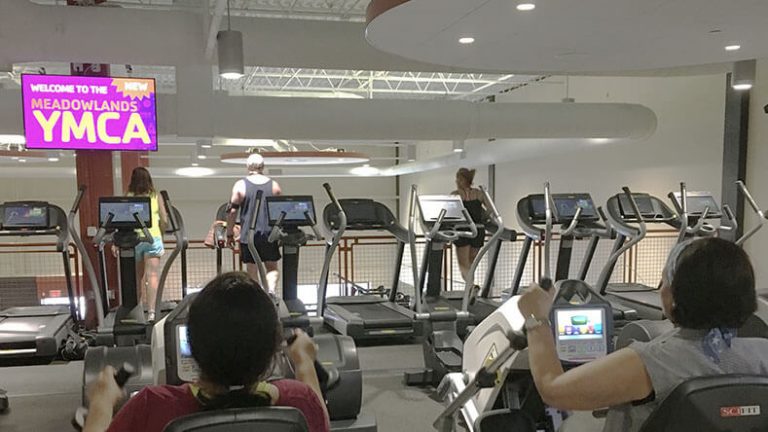 The Meadowlands YMCA is Finally a “Y with Walls”!

DMR joined the YMCA Board of Directors, CEO & staff; John Mara of the New York Giants; and stakeholders of the Meadowlands community for the grand opening celebration of the new Meadowlands YMCA on May 19.

The Meadowlands Area YMCA, once referred to as “the Y without walls” because it operated out of more than 50 locations throughout the region since 1920, moved into its first centralized location this month.

DMR was retained to transform the former Brooklyn Nets headquarters and training center into a new 83,200-square-foot community center. The project redesigned the existing building to provide a 21st Century Y that answers the needs of today’s health-conscious population in a modern, accessible environment replete with amenities including the Gourmet Fit Cafe, retail shop and numerous Wi-Fi enabled social spaces. A 9,600-square-foot aqua-center with a 25-yd, six-lane competition pool is under construction and scheduled to open in the fall.

“While so much has changed about our lifestyle, technology, communication, and transportation in the past century, the Meadowlands YMCA has been a mainstay in the community,”  Jane A. Egan, President and CEO of the Meadowlands Area YMCA and a staff member since 1980, said.  Through the support of our donors and elected officials, we’ve been able to create a center that will serve the community for at least another 100 years.”

“The contributions that led to this day came in many forms from many corners of the community,” Ron Simoncini, Chairman of the Meadowlands Area YMCA’s Board of Directors, said.  “This is a facility that transforms the region, and we are very gratified to start our next 97 years with an asset we can all be proud of.”

Nearly 25 years later, building is the same, but serving builders is very different