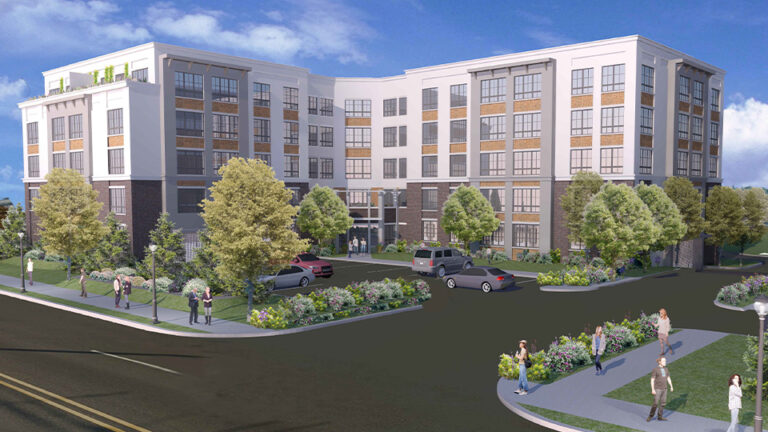 Ed Russo, the developer converting the Annin Flag building in Verona into an apartment complex, said he wanted to maintain the historic integrity of the property.

Russo started that pledge by commemorating the start of the construction at the Bloomfield Avenue site on the holiday most associated with its former use: Flag Day. On Wednesday morning, June 14, the Verona Fire Department Honor Guard helped raise the American flag high into the air while people connected to the project swapped stories about the facility’s past and future.

“Today is Flag Day as everyone knows, and what better place to celebrate Flag Day than this property,” observed Russo. “We hope this will be something we can do now that’s symbolic, but more importantly we want everyone to come back a year from now and help us cut the ribbon.”

From 1919 to 2013 the building was a flag manufacturing plant. It ceased operations in 2013 and will now be converted into 112 rental units. Carter Beard, the CEO and president of Annin Flag, said it was an emotional day to signal the change at the Verona site.

“It’s a little bit of a sad day because it’s the end of a factory that had been there for 100 years,” Beard said, “but it’s exciting because it will be the Annin Lofts going forward, and I think it’s going to be a beautiful project.”

A rendering of the future of the Annin Flag building on Bloomfield Avenue in Verona. (Photo: Joshua Jongsma/NorthJersey.com)

The main Annin building will include 52 loft-style apartment units, and a new second building next to it will hold 60 more. It will include studio, one-bedroom and two-bedroom apartments.

The existing building is four stories tall but the re-purposed version will add an extra floor for a penthouse.

Kurt Vierheilig, the architect working on the project, said they anticipate the development being ready within 12 to 14 months.

Joe Vallone, a Cedar Grove resident who worked as the Annin plant manager for 32 years, made many memories there. He recalled an especially active time at the building following the Sept. 11, 2001 terrorist attacks. Annin added 100 extra employees at the facility to keep up on demand and fixed four New Jersey State Police buses with flags.

Annin employees also made a made a 60-by-90-foot flag to be flown at the George Washington Bridge, according to Vallone.

“This is like home to me,” he said. “I had been treated well here. There were times when we had blizzards and I’d stay [overnight]. I lived on coffee, cake that was in the machines, but we got through. It’s kind of sad to see this happening, but we know it’s necessary, and I’m glad to see something done with the building.”

Verona Mayor Kevin Ryan said the Annin site serves as a gateway to the community due to its location near the township’s border on Bloomfield Avenue. Ryan noted how the Annin Lofts follow a trend for Verona.

“For a small town,” the mayor said, “2.7 square miles, every time I think it’s totally developed, somebody else comes up with another piece of property that they want to redevelop or do something with.”