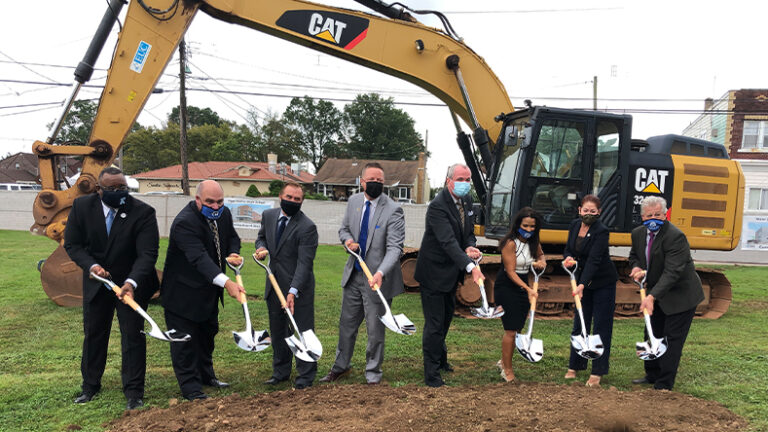 Governor Murphy was on hand to celebrate the groundbreaking of Carteret’s DMR Architects-designed junior high school that will support the municipality’s 21st Century educational practices and enhance the learning experience for all students.

Plans for the 60,000 square foot school include 24 classrooms for traditional subjects with dedicated spaces for enhanced art and music education, a think tank, and a STEM lab for 600 seventh and eighth graders.

“Carteret continues to move into the future with vast improvements to our schools,” said Daniel Reiman, Mayor of Carteret.  “The new Junior High School will provide a greater environment for our children to learn and will increase property value, helping to make Carteret an even better place to live, work, and raise a family.”

“Studies show that students exposed to the arts and innovative sciences like coding generally perform better in school,” said Rosa Diaz, Superintendent for Carteret’s school system that educates 4,000 students.  “The new school is much more than a brick and mortar building. It is a major step that will bring us closer to becoming the premier school district I know we were destined to be.”

“Carteret is making an investment in its students’ futures by providing them with educational spaces beyond traditional subjects,” said Lloyd Rosenberg, President and CEO of DMR Architects.  “We’re being asked to create ‘maker’ and ‘FAB’ and other alternative learning spaces that allow kids to explore, learn and tinker, and secure critical thinking skills that will benefit them in high school and beyond.”

The new Junior High School is part of a $37 million referendum passed in September 2019.  Also as part of the referendum, DMR is completing renovations to the district’s five existing schools, with projects including upgrades to the high school auditorium and bathroom, HVAC, and stair tower upgrades across multiple schools.

The project is expected to be completed in the fall of 2022.

DMR is a Best Place to Work in New Jersey