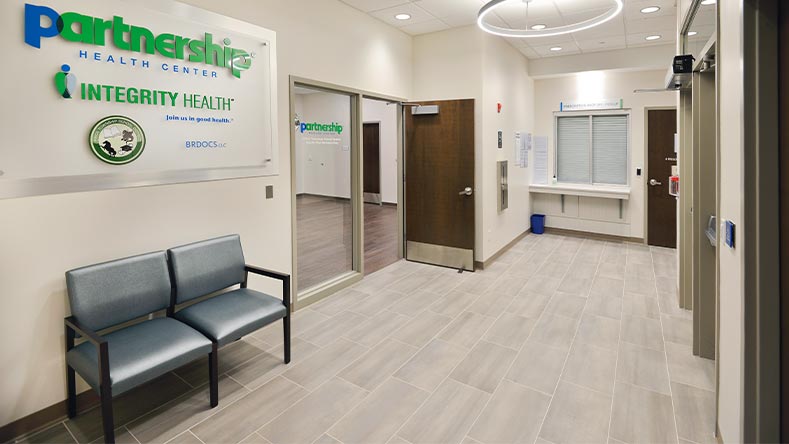 On March 2 Integrity Health cut the ribbon on their newest Partnership Health Center, an on-site healthcare office, at the Warren H. Wolf Elementary School in Brick.

Founded by Doug Forrester, Integrity Health teams up with employers to find and renovate space in existing, employer-owned buildings for Partnership Health Centers, where members can receive routine medical services in one location. The services are provided without fees or deductibles and are available only to members and their dependents, resulting in convenient and fast routine medical services. 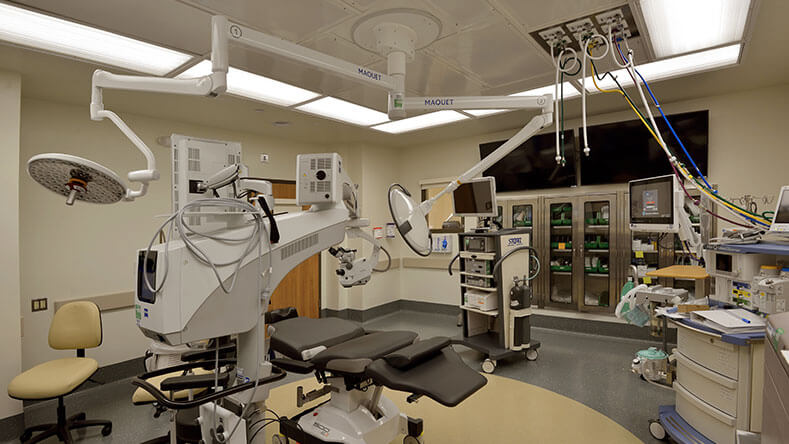 On June 14 DMR joined Hunterdon Healthcare for the ribbon cutting of the new Ambulatory Surgery Center at the healthcare system’s Bridgewater facility, the second phase of a project that transformed a former Bank of America building into medical office space.

“While healthcare system expansion is now becoming the norm, Hunterdon Healthcare was ahead of the curve, recognizing and responding to changing residential patterns years ago,” Lloyd Rosenberg, President and CEO of DMR, said. “New Jersey residents are moving farther out from urban and suburban areas where a high quality of life is more affordable, and businesses of all kinds are smart to expand or move close to potential customers, or in this case, patients.”

“Patients shop around for healthcare the same way they do for other products and services,” he added. “We’re reimagining spaces to support Hunterdon Healthcare’s goal to provide personalized care in easily accessible office spaces.”

This project is DMR’s latest in a thriving portfolio for the rapidly-expanding Hunterdon Healthcare system, a portfolio which also includes the imaging center, a third phase, at the Bridgewater facility; two phases that brought pediatrics, podiatry, behavioral health and other specialties to the system’s facility in Hawk Pointe; and a family practice to the system’s Hickory Run Medical Office Building in Califon. DMR also previously completed the Maternity and Newborn Care Unit at the Flemington facility. 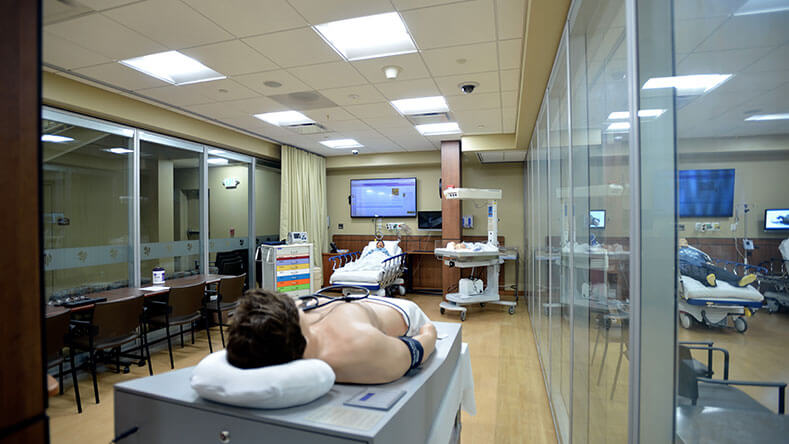 On February 27 St. Peter’s University Hospital in New Brunswick dedicated the new Simulation Center for Interprofessional Learning, a 5,500 SF space that provides educational space for resident’s use and practice. The space includes The Institute for Bedside Medicine, which teaches medical interviewing; The Institute for Technical Simulation, which uses state-of-the-art equipment to teach and evaluate skills; and a medical reference library for providers and patients.

“Technology, as well as changing needs of patients and practitioners, continues to provide opportunities to rethink underutilized spaces to create a more organized, cohesive, and comprehensive healthcare experience for St. Peters Hospital staff and patients,” Lloyd Rosenberg, President and CEO, said. “It is especially rewarding to fulfill the architectural needs of healthcare professionals that are on the cutting edge of medical breakthroughs with offerings like the Simulation Center for Interprofessional Learning.”

The St. Peter’s Simulation Lab is among numerous healthcare projects completed by DMR Architects, which includes projects for numerous other major hospitals in New Jersey. In addition to our detailed portfolio of completed projects, we look forward to even more openings in 2018, which among several projects with Hunterdon Healthcare, will include the new surgery center at their facility in Bridgewater, in addition to several projects for Hackensack Meridian Health.

The former Bank of America building on Route 22 in Bridgewater now accommodates specialists in gastroenterology, endocrinology, urology, breast surgery, cardiology, physical and occupational therapy, imaging, diagnostic services and procedural services. In a partnership with the hospital, Atlantic Health will lease space in the building.

DMR designed the 55,000 square foot project, which required a very complex construction phasing plan. Construction continues on two more floors of the building. The three-story space has been designed to be patient-friendly, and includes features such as arched ceilings to create a light and energetic atmosphere, and large windows that overlook surrounding trees. 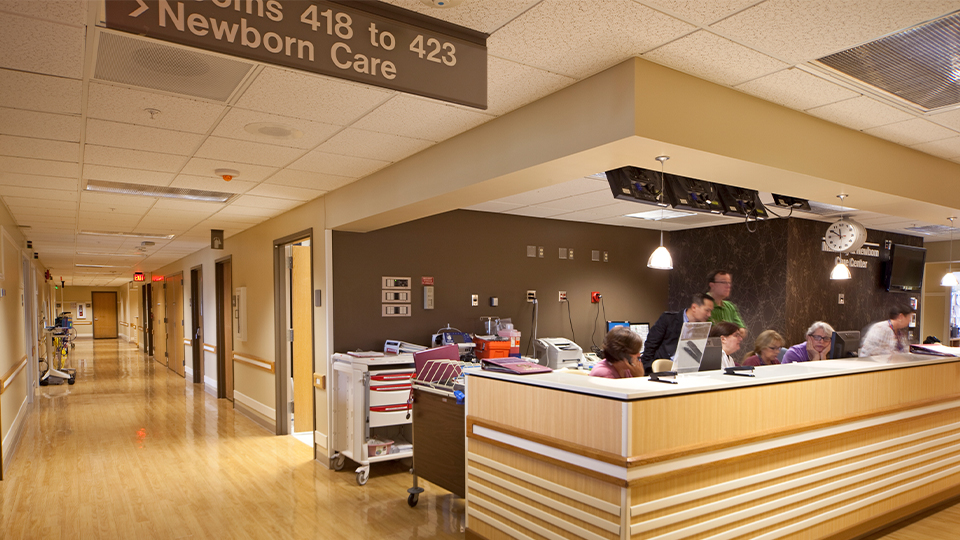 For DMR Architects, a relationship with Robert Wood Johnson Health System goes back 15 years and spans more than 20 projects—from nursing stations to a nuclear medicine facility.

And much of that work came before the sea changes affecting today’s health care sector.

It’s one reason why Lloyd Rosenberg sees the industry as a potential growth area for his Hasbrouck Heights-based firm. With shifts in how and where health care is delivered, he’s confident those changes will translate into new space needs and new requirements for the design community.

“We hope it’s a growth area,” said Rosenberg, the firm’s CEO and president. “We think there’s a lot of opportunities that are coming out of the changes that are being made, and we’re trying to stay on top of it and keep everybody happy.”

One of DMR’s most recent projects is especially reflective of one prominent trend: mergers and partnerships in New Jersey’s hospital sector. The firm has designed and is now overseeing construction of a 55,000-square-foot building in Bridgewater for Hunterdon Healthcare, which is expanding in Somerset County under a partnership with Atlantic Health System.

Plans call for renovating a three-story former Bank of America building on Route 22 and retrofitting it to include medical offices for a host of specialists from both systems, an ambulatory surgical center and an imaging center. Completion is slated for the end of this year.

It’s one of two projects DMR is doing for Hunterdon Healthcare—with the other being in Washington Township, Warren County—and Rosenberg said the plans reflect the changing mission of the industry.

“It’s become more competitive now, (and) it’s more evident now that health care is expanding into where people are living, as opposed to everybody going to the hospital,” he said. “Now most of the surgeries and other things are done in outpatient facilities.”

For its health care clients, Rosenberg DMR is often helping with programming—determining what their needs and space requirements are, while potentially planning beyond the current project.

The project called for renovations to three floors that are 2,000 square feet each, with the aim of enhancing the efficiency of the nurses and making it more aesthetically pleasing. DMR recently was hired to redesign the 3,500-square-foot first floor of RWJ’s Somerset Street office building.

Recent Posts
Recent News
Recent Press
Login to DMR Architects
Reset Password
Enter the username or e-mail you used in your profile. A password reset link will be sent to you by email.