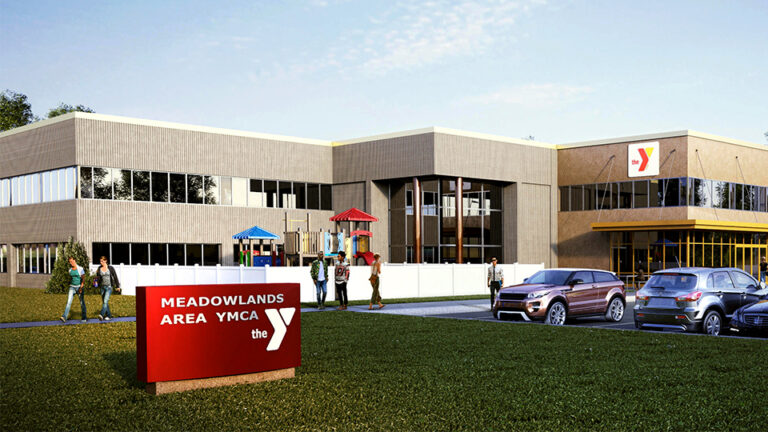 A rendering is shown as people begin to gather prior to the ribbon cutting ceremony for the Meadowlands Area YMCA in East Rutherford on Thursday, July 28, 2016. (Photo: Mitsu Yasukawa/Staff Photographer)

With its new home set to open early next year, the Meadowlands Area YMCA will create more than 100 full-time and part-time jobs and be able to serve 20,000 more people than the organization does now, an official said on Thursday.

Jane Egan, president and chief executive of the YMCA, offered an update on the renovation of the former headquarters and training center of the Nets basketball team. The building will become an 83,200-square-foot community center for her organization. Egan addressed about 80 people, including many local and Bergen County officials, during a construction ceremony at the former practice facility at 390 Murray Hill Parkway.

Once the renovation work is complete, the Meadowlands YMCA, known as the “Y Without Walls” because it hasn’t had a central location for 96 years, will finally have a full-service center with the two existing NBA-grade basketball courts; a daycare center; a wellness center; exercise and dance studios; teen and senior citizen centers; a theater; technology labs; a rock-climbing wall; a food concession; and a retail shop.

The new YMCA facility “will be a beacon to the community, a center that encourages health, supports families, invites diversity and responds to the many needs of the community,” Egan said.

The second phase of the work includes construction of a 9,600-square-foot aqua center with a competition pool, which will be added to the main building. The YMCA is awaiting zoning approvals from the New Jersey Sports and Exposition Authority for the pool, and still needs to raise the $3 million to $3.5 million that it will cost to build through its capital campaign, Egan said.

Originally, the YMCA projected that it would cost about $7 million to revamp the Nets’ facility, including the cost of the pool. But that overall estimate rose to $9 million when it was discovered that more alterations would have to be made to the Nets’ building than originally anticipated, Egan said.

The YMCA will be hiring more than 100 people for the new facility, full- and part-time, adding to the organization’s existing 300-employee staff, Egan said. And with the large new center the YMCA will be able to serve 32,000 people a year, up from 12,000 now, she said.

At the event, officials donned yellow construction helmets and wielded sledge hammers at the Nets’ building, which has been gutted and isn’t air conditioned, to symbolically mark the next stage of the renovation.

The YMCA’s day care center is named after the Mara family, financed with a gift from John Mara, president and chief executive of the New York Giants.
The Nets left East Rutherford to move to the new $50 million Barclays Center in Brooklyn.

The YMCA had purchased a warehouse in East Rutherford not far from the Nets practice center for $5.3 million in December 2012, intending to use that for its home. But the organization decided to move into the Nets building instead when it became available, and sold the warehouse earlier this year for $6.2 million.