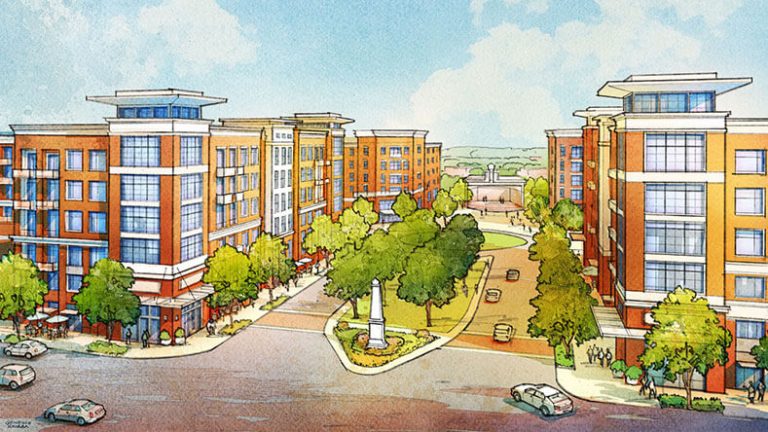 The redevelopment of one of New Jersey’s busiest commercial corridors, Route 18 in East Brunswick, is underway, with the latest step forward coming in the form of two RFPs to developers.

On one of those tracts, 88 acres that includes the Route 18 shopping center and Loehmanns Plaza, DMR developed a redevelopment plan that will bring these lots, all currently under performing or vacant, to life. Despite traffic of more 100,000 cars daily, Route 18 has one of the highest vacancy rates in the State, a challenge that the Township needed to address among other issues including a lack of a downtown center, a growing suburban population and a high volume of commuters who travel to the Township on their way to New York City.

As part of this effort, DMR developed multiple concept plans which called for a town center, including 95,000 SF of retail, 700 units of residential, 62,000 SF of office space, and a parking structure. The plan also includes a hotel, a boulevard and open space.

The RFPs to developers, released last week, are an important step toward implementing needed change.

“We are so excited to welcome a developer to our dedicated team of professionals who are pushing forward our 2020 Vision,” Mayor Brad Cohen said, “Located at the center of the State and close to Rutgers, every major highway and the shore, we are hopeful this project will attract significant interest from the development community.