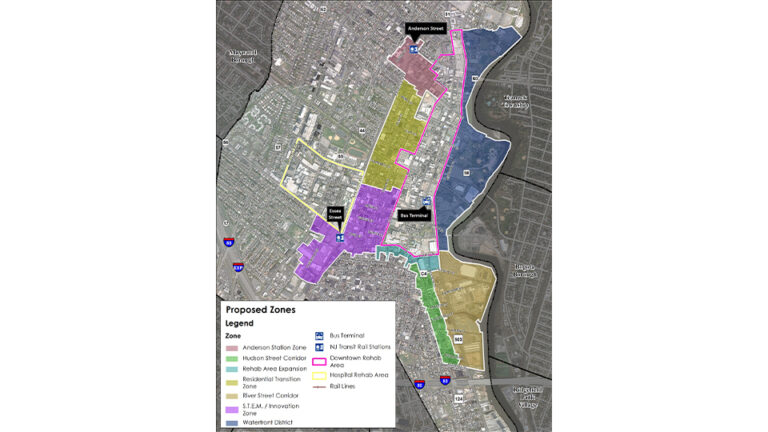 As densely populated as New Jersey is and as much development as we have seen over the last decade, there remain many once thriving communities struggling to regain relevance. Like many of these proud communities, Hackensack’s fate was sealed back in the 1970’s, with the advent of the malls and proliferation of land use policies that promoted isolated land uses where people would work in one location and live another. Previously esteemed communities like Hackensack slowly died from the inside. Left with little to no residential, high vacancy rates and low rents, these suburban downtown centers become desolate, dangerous areas with little opportunity for revitalization. Even today, there are many communities struggling to create a strategy to recover their vitality without having to compromise their vision and values.

It’s been a long road for Hackensack. Understanding all of the layers, all of the details, all of the pieces that have to be considered from the very start through every decision that is made every day to support the goals, objectives and vision for the City can be daunting. Most people would have given up on the thought that one day Hackensack would have another day in the sun and even with dozens of projects underway, there are still doubters. Even communities who can correctly articulate a strategy that takes into account the complexities of a changing demographic society looking to live and work in ways that no previous generations considered are lost for lack of the most essential element to revitalization: a plan.

But unlike many communities, Hackensack took this first step in redevelopment—which is the hardest to take. A plan may sound simple, and at the beginning it is: create a vision that represents the goals and objectives of the community. Then, identify public initiatives, plans, zoning, projects necessary to encourage the maximum amount of private investments and it quickly becomes more complicated. The plan also needs to maximize private investments in an area with numerous property owners, failing infrastructure, with poor circulation, that lacks parking and provides little to no entertainment without the use of condemnation within an existing and constrained 2% municipal budget. Each decision has to be weighed and measured to understand the financial implications while continuing to seek what is best for both its existing and future residents.

The key is to create a plan that promotes private redevelopment, increases tax revenue and enhances the community in a manner that meets the goals and objectives of the residents that is realistic for both the municipality and for the development community. Too many plans are written that are either not practically realistic or are not financially feasible. This key aspect is one of the most important differences from a plan that sits on a shelf, to a project that gets built. For municipalities, the professionals that represent you and their knowledge of development, costs and construction is a critical component to the creation of a plan.

For Hackensack, this meant creating zoning that encouraged land assemblages by creating a two tiered as of right zoning within the downtown. For small individual properties, a non-catalyst zone was created, which promoted smaller scaled redevelopment with appropriate parking ratios. However, for developers that assembled multiple properties that fronted on Main Street (Min. 200’) a catalyst zone was created, which permitted higher density development with lower parking ratios. For Hackensack’s revitalization this was a key component. Without the use of eminent domain and without any existing large land owners, creating zoning that promoted land assemblage allowed development to move forward. This along with designating a large enough area that allowed developers to find willing sellers without having such a large area that development could feel scattered and unconnected was a crucial first step in creating a vision for the downtown. The result of these strategies was that real estate brokers started to assemble multiple properties and package them for potential developers to consider.

In addition, the implementation of a streamlined submittal, review and approval process through the adoption of a Preliminary Review Committee Process, that gave developers a more certain understanding of the timeline and schedule. Architectural and Streetscape Design Standards were included in the Rehabilitation Plan and every Redevelopment Plan that has since been adopted. These standards represent the architectural design and scale that is consistent with the vision of the community and are the key to getting the look and design of a building during site plan approval.

The final piece was the City’s willingness to consider long term financial incentives to potential developers as a means to move development forward. This tool provides the City with significant increases in revenue that can be invested back into the City in the form of infrastructure improvements and new community facilities. For Hackensack that included the construction of a new public park, the renovation of a 140 year old abandoned building into a state of the art Performing Arts Center, the renovation and expansion of a Community and Recreation Facility, the design of new streetscape, the separation of combined stormwater and sewer system and the conversion Main and State Street back to two way. Fiscal responsibility included hiring an independent financial analyst to review each proposed PILOT.

Hackensack has attracted more than $500 million in private investment in less than 10 years, providing an example for the revitalization ambitions of other communities. Today, there are more that 750 new residential units under construction, with another 750 units that will start construction in 2018 and more than 2,000 additional units planned for in the next 5 to 7 years. The City recently opened a state-of-the-art Performing Arts Center and an award winning downtown park. The conversion of Main Street to two-way traffic is under construction and will include new streetscape and much needed and long overdue infrastructure improvements—all paid for by the revenues generated by redevelopment. The plan put in place only six short years ago is working.

Anatomy class at this N.J. school just got a lot more high-tech

Past (and future) glory: In real estate, older can be better