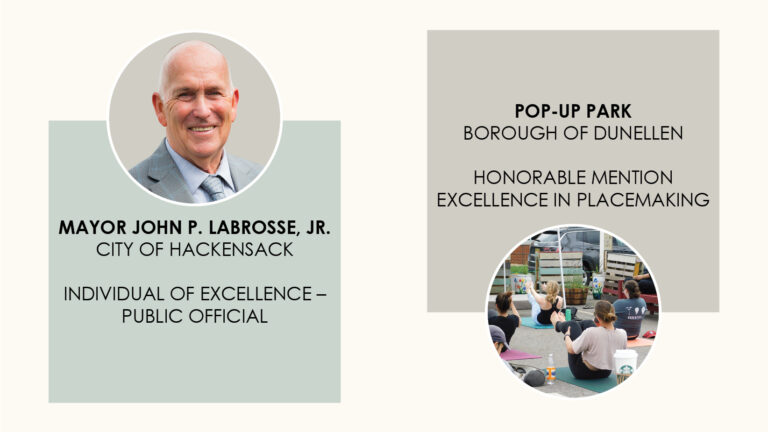 Downtown New Jersey announced the winners of their Excellence Awards, which recognizes projects, programs and individuals for their impact on downtown economic development. This year, two friends and clients of DMR will be among the honorees, including:

Since 2011, the City of Hackensack has undergone a tremendous renaissance, illustrated by more than $1 billion in private investment, 4,000 new residential units, with another 2,000 on the boards, and many sophisticated infrastructure, outdoor space, zoning, funding, and connectivity efforts. This level of success would not have been possible without the clear vision and dedication of Hackensack Mayor John Labrosse. During his nearly ten-year tenure as mayor, John Labrosse has demonstrated a tremendous commitment to the redevelopment of downtown Hackensack. Elected to the Hackensack city council in 2009 and becoming mayor in 2013 when the city’s redevelopment efforts were in its infancy, Mayor Labrosse has remained the City’s elected leader through its most significant stages of redevelopment.

“The remarkable redevelopment success in Hackensack would simply not have been possible without the clear vision and commitment of the city’s municipal team, led by Mayor John Labrosse,” said Francis Reiner, PP, LLA, Director of Redevelopment and Partner for DMR Architects, the city’s downtown redevelopment consultant. “All you have to do is look around Main Street: the rising buildings, attractive streets, art, culture and overall vitality are all due to his unparalleled dedication.”

Honorable Mention for Excellence in Placemaking

In the summer of 2021, the Borough of Dunellen implemented the first of several community revitalization and placemaking efforts of the mile-square borough – a pop-up park located along the main commercial corridor of North Avenue. Reflecting the importance of public space and placemaking initiatives, the low-cost, high-impact project brought to life an under-utilized parking lot in the heart of the downtown. Located near businesses, the train station, and Borough Hall, the temporary place provided space for residents and visitors to sit, relax, engage with their community and take part in special programming, such as yoga classes, musical performances, Coffee with a Cop, and programming in support of the arts, the library and local businesses. Through community support and corporate sponsors, the Dunellen Pop-Up Park engaged hundreds of residents and visitors and more than 15 local businesses and organizations.

“Through the pop-up park, hundreds of residents and visitors who may not have otherwise spent time downtown last summer were able to connect with neighbors, businesses, and organizations; and most importantly, experience the great downtown atmosphere of Dunellen. The project was made that much more special because of the heart of Dunellen, our community of volunteers, who brought this project to life,” said Mayor Jason Cilento.

For more information on the other award winners or the May 24 award ceremony, please visit the Downtown New Jersey website.