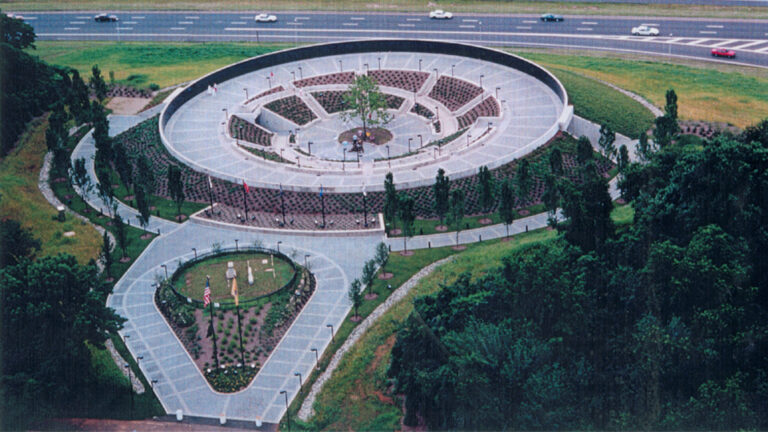 Architect Lloyd Rosenberg was undaunted when plans for a nearly $1 billion commercial development in Ridgefield Park had to be dramatically reconfigured to accommodate Al and Alice, a pair of bald eagles.

“We had to redesign the whole project,” said Rosenberg, president and chief executive officer of DMR Architects in Hasbrouck Heights. “It’s just part of what we have to do … It’s not unusual.”

DMR has done extensive work in North Jersey, where the only land left to develop often poses environmental or wildlife-conservation challenges, be it protecting eagles or bog turtles, according to Rosenberg. If you live in the region, odds are pretty good that you’ve set eyes on at least one place or project DMR has worked on, be it a hospital like Holy Name Medical Center in Teaneck, the Secaucus train station, downtown Hackensack’s redevelopment or the New Jersey Vietnam Veterans’ Memorial in Holmdel.

This year, booming DMR, the fourth-largest architectural firm in the state in terms of staff size, is busy with two big projects. It is architect and planner for SkyMark, a Ridgefield Park development — in the works for two decades — that will include about 1,500 residential units, 350,000 square feet of retail space and a 300-room hotel when its final phase is complete. Construction on the project, dubbed “Eagle’s Nest” by some, is finally expected to begin this spring. And work is continuing on Hudson County’s new $144 million High Tech High School in Secaucus, designed by DMR. The final steel beam was installed last week at the site, 22 acres adjacent to Laurel Hill County Park. The 350,000-square-foot facility is slated to open in September next year.

A third DMR project, the $10 million transformation of the former Nets basketball team’s training center in East Rutherford to the home of the Meadowlands Area YMCA, opens in April.

Buoyed by such undertakings, and the economy’s recovery, DMR enjoyed a banner year in 2016, when it celebrated its 25th anniversary. The firm, which has about 100 projects in various stages, saw its projected revenue last year climb about 84 percent to $9.8 million from $5.3 million in 2015. So it could accommodate its increased workload, last year DMR added nine employees, bringing its staff roster to 39. And last week, for the first time, DMR named five partners, Rosenberg said, to spread management duties and to lay a foundation for his succession.

New high school was a boon

DMR founder Rosenberg, who turned 74 last week, said the firm got a big boost last year because work on the regional high school in Hudson County got off the ground, a project being bankrolled by the county and the state. He acknowledged that DMR suffered some bad years, most notably during the Great Recession, and cited the cyclical nature of his business in explaining why 2016 was stellar.

“The real estate market was strong in New Jersey,” Rosenberg said. “The municipalities we work with felt confident to go out and have their facilities improved. The private developers – low-interest rate, greater demand, increased values – they became strong. The reason we’re so successful is we have a very diverse practice. So we do private work. We do schools and colleges. We do public facilities, police stations and municipal buildings. We do office buildings. We do health care … We have a diverse practice, and all of the sectors in the market sort of increased volume.”

That’s the strategy behind having a full-service architectural practice, according to Rosenberg.

Consequently, we did better and we hired more people.”

DMR’s recent growth appears to have been outpacing its peers. The American Institute of Architects tracks billings nationally and regionally through its Architecture Billings Index, or ABI , said Ben Lee, the new president of the group’s New Jersey chapter and chief financial officer for NK Architects in Morristown. In November, the index was 50.6 nationally and 50.8 for the Northeast, according to Lee. Anything above 50 represents an increase in billings. Referring to the Northeast’s performance, he said, “It’s good, but it’s not moving a full digit.”

The SkyMark center rivals American Dream Meadowlands, the massive retail-entertainment complex being built in the East Rutherford Meadowlands, in terms of its delays.

“We’ve owned this property since 1999,” said Tony Noce, development manager for Paramus-based SkyMark Development Co. “It was originally going to be developed as office but now it’s mixed use and it’s just a complex project … We’ve done all the environmental remediation. There was an eagle’s nest. We had to get major infrastructure improvements approved with the N.J. DOT [Department of Transportation] and the Turnpike Authority to provide access to the site. All these things take a lot of time to get.”

As the architect and planner, Rosenberg said DMR had the task of reworking SkyMark’s plans to create a five-acre buffer to protect the two eagles and their nest.

Ultimately, the plan approved by federal officials will carve out an 11-acre eagle preserve on the southern end of the SkyMark property, taking up about 20 percent of the 55-acre site, Noce said. SkyMark will be built at the crossroads of the New Jersey Turnpike and routes 46 and 80.

Noce said he and developer Ralph Ianuzzi Jr. are in the final stages of putting together SkyMark’s financing. They are slated to meet with the Ridgefield Park village board of commissioners this week to update them on the project, according to Mayor George Fosdick. Noce said he expects construction to start in late spring.

This year construction on another one of DMR’s projects, a $7 million Garfield police station, is also slated to begin. The current headquarters on Midland Avenue, constructed in 1960,  is “woefully undersized” for the 66-member police force and “was built for another era,” City Manager Thomas Duch said. Local police headquarters have become another DMR area of expertise, according to Rosenberg.

Originally, plans were for another architecture firm to design the new Garfield police headquarters. However, city officials gave DMR the job after they were “impressed” by a presentation by Rosenberg, as well as by his design work at the Bergen County Public Safety Operations Center in Mahwah, according to Duch.

“Many of these police stations now are outdated,” Rosenberg said. “They don’t have the current technology. Their facilities are not safe. They’re not habitable.”

Rosenberg said it’s hard to make forecasts for this year, but that he thinks President Trump will be effective helping the business community and stimulating the economy, especially in the tri-state region.

“I hope that he does the things that he said he’s going to do with infrastructure and public work and hospitals and schools,” Rosenberg said. “We do live in his geographic area.”